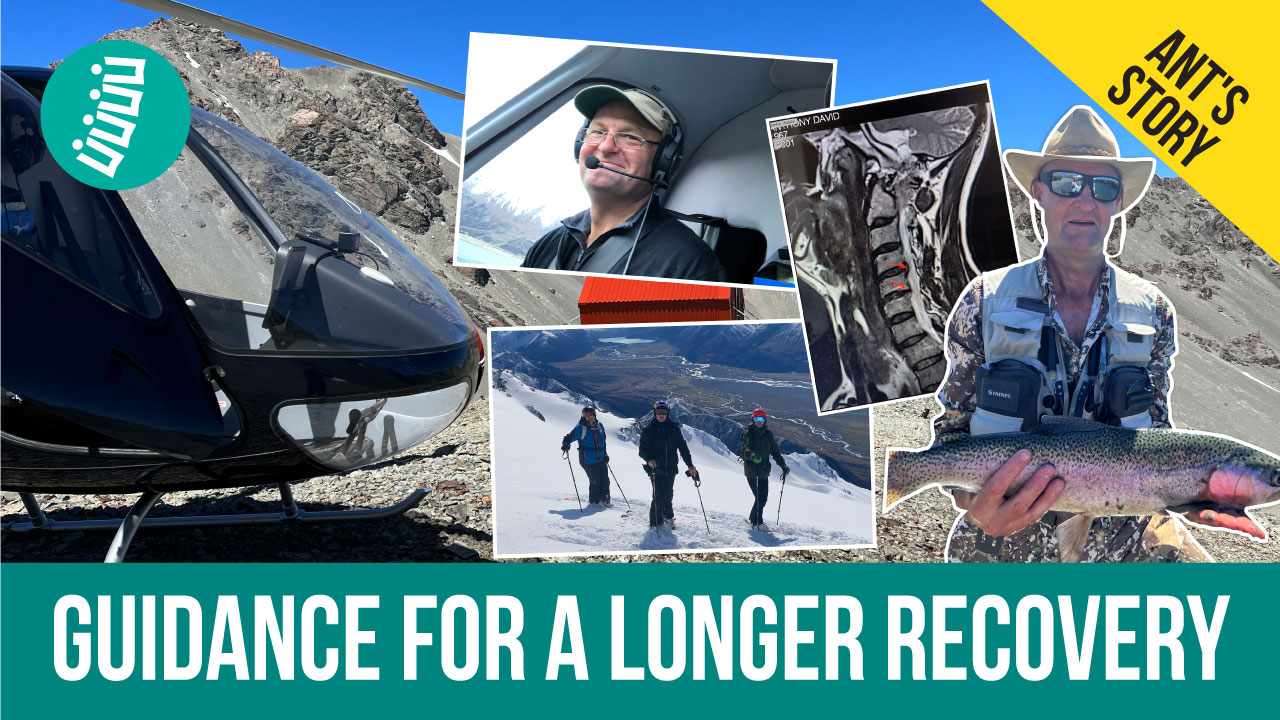 Anthony first contacted us in August 2020 after learning two of his friends in Auckland, New Zealand, had travelled to Germany for disc replacement surgery after we had our specialist Dr. Thomas Bierstedt review their cases.

He had suffered mild neck discomfort on and off for 15 years and managed it well with exercises and stretching, but unfortunately this progressed to the point of severe pain and stiffness in his neck, and a loss of strength in his left arm. Until this point he had lived an active lifestyle and enjoyed skiing, hunting, fishing, helicopter aviation, boating and hiking in the mountains – he was no longer able to enjoy the lifestyle he loved.

We guided Ant through the evaluation process, and it was clear he had two degenerative cervical discs at C4-5 and C5-6 that correlated with his symptoms. ONZ and Dr. Bierstedt confirmed he was a good candidate for a two level disc replacement, and that after his recovery he could return to the lifestyle he enjoyed. – Dr. Thomas Bierstedt Review

10 Questions on My Journey to Recovery

Q1. As a fit and active gentleman in your early 50’s, what type of lifestyle did you enjoy in New Zealand?

I have always lived an active lifestyle and remained relatively fit. I grew up on a farm and played many sports in my youth. In the last 20 years I have enjoying skiing, hunting, diving and hiking in the mountains. I am also actively involved in a farm and that requires quiet a varied type of physical work.

Q2. At what point did you realize your case was beyond conservative therapies, and that spine surgery may be required?

I had suffered neck pain off and on for circa 15 years but have always been able to manage it by staying active, fit and flexible. I have found that when I have required surgery on other parts of my body, such as knee ACL replacement or rotator cuff replacement that post surgery when I was inactive my neck pain would invariably become much more acute. On a trip to South America which involved a lot of sitting whilst traveling my neck pain became debilitating. On my return to NZ I undertook considerable therapy but didn’t get much improvement. I then lost strength in my right arm and suffered from a case of drop foot on my left leg. It was at that point that I realized I had some potentially more serious issues and needed to try and find a more permanent solution.

Q3. What factors made you choose to travel to Germany for the surgery?

I visited a New Zealand spinal surgeon who reviewed my scans and advised that I was best to wait and see if the drop foot and loss of power to the arm resolved themselves over the next 3-4 months.

I also started doing some research on what the potential surgical options were. My understanding is that in NZ the “Surgical Guidelines” still favoured fusing over disc replacement. I also understand, that in the event disc replacement is done the number of discs types available are limited and they will only replace one level. I tried to make an appointment with my favoured surgeon and was told the next available appointment was 6-8 months out. In discussions with friends I became aware of New Zealanders traveling to Germany to have surgery there. After further investigation it transpired I actually knew two of the people personally. After discussions with them I made contact with Jake Lemon at Spine Connection.

Q4. What were your impressions of the medical team and support staff, including your surgeon Dr. Thomas Bierstedt?

The Spine Connection / ONZ process is very seamless. The response times are light years ahead of what is achievable in NZ. I had a response and suggested options for surgery within one week of sending my scans across. Once I committed to surgery in Germany then all I needed to do was arrange my travel to Frankfurt airport where I was collected by the ONZ team and was under their care until I was dropped back at Frankfurt airport to return to NZ. ONZ has their own nurse, (Suzanne) who is your primary contact whilst in Germany and she is fantastic. Suzanne spent 13 years in NZ as a nurse and accordingly speaks very good English and understands Kiwis and Australians. I was fortunate to have the benefit of talking to Dr. Bierstedt on the phone before departing to Germany and found him to be very considered, competent and approachable. This first impression proved to accurate when I met him in Germany.

Q5. How was your post-op recovery and rehabilitation in Germany, including the second week spent at Medicos AufSchalke?

Post-op I recovered remarkably quickly and was surprised how mobile I was. The Germans have access to a number of medications not commonly used in NZ and these are very helpful in the period immediately after surgery. The second week at Medicos was a new experience and unlike anything that is available in NZ. Whilst you can get access to all the therapies available at Medicos in NZ it is not possible to get them all in one place and arranged back-to-back throughout the day for a week.

Q6. Upon returning home, when was the first setback in your recovery, and how did you deal with it?

My first setback was 2 months after surgery and self-inflicted by overdoing it and trying to straighten a heavy rug. I had reasonably significant pain and was concerned I had done some damage and had some x-rays done which were reviewed by ONZ who confirmed the implants were fine and no damage had been done.
Several weeks later when I was starting to recover from my first setback I tripped over and gave my neck a good jerk!!. Whilst it was sore it was not materially different but got worse over the next few weeks although the symptoms/ pain in my neck/ head appeared different from anything I had previously experienced. At that point I was in significant pain and was looking for help.

Q7. Did you receive support from Spine Connection and the team in Germany?

I contacted Jake looking for help who after consultation with ONZ suggested I get further scans done for them to review. ONZ reviewed the scans and said that the implants were exactly as they would expect and that my symptoms were not entirely consistent with a problem with the implants. I was genuinely appreciative of the fact that Jake and the ONZ team were contactable and were happy to review additional scans at no extra charge.

Q8. The recovery from spine surgery is not always linear. Describe your journey over the past 15 months?

Post-surgery you feel vulnerable and are continually looking for cause and effect. The question you are continually asking is what did I do yesterday that has caused my pain to be worse today. The reality is I am not sure it is that straight forward. In my case pain was not consistent throughout the day and in most cases did not necessarily correlate to any specific physical thing I did. It is not like recovering from a normal injury that normally gets better over days/ weeks. You need to measure improvements over a longer period, like a month.

Unfortunately for me after tripping over my position did not improve and I was struggling to function normally and was reliant on nerve blockers and became house bound for several months. I continued with my exercises as best I could but was down to walking no more than 10 minutes in a day.

About six months after my surgery I was seeing some improvement but was still very limited in what I could do and saw a specialist in NZ who again reviewed my scans and reached the same conclusions as ONZ, that my implants were fine and exactly as expected. By then my symptoms had become clearer which lead the specialist to conclude that I had likely suffered whiplash at C1/C2 when I tripped over and that this can affect the central nervous system. Implants are at C4/C5, C5/C6.

Whilst it was great to understand what was going I was advised that it can take circa 12 months to recover from whiplash. This was not great news but gave me a target and a timeline to work to. I tried many different therapists and if it didn’t work I would try something else. In my case I found myofascial massage particularly helpful. Over the next 8 months I slowly increased my physical activity. The path was certainly not linear and I had many setbacks that lasted up to month along the way. I am now back to exercising 4-5 times a week and taking no pain meds.

Q9. Have you been able to eventually return to your active lifestyle you enjoyed before your neck damage?

In my mind I am still continuing to improve. I have returned to all the activities that I did pre-surgery and am again enjoying some activities that I had given up in the years leading up to my surgery. At the age of 54 I am still very active and enjoy hunting, fishing, hiking, skiing, and working outdoors.

Q10. What guidance would you give to patients recovering from spine surgery, who are having a longer recovery or more setbacks than they expected?

Play the long game. You are going to have many setbacks and shitty days. Whilst it is exhausting and mentally taxing you need to pick yourself up off the floor every setback and keep moving forward. Find good therapists and if something isn’t working after 4-6 weeks, try something else.


Article Link: What happens if complications arise after I return home?
This helpful article explains the process so patients can know what to expect in the unlikely event of a complication or new symptoms after they return home from overseas treatment.