Patients requiring surgery may choose a motion-preserving surgery (if available to them) or they may require a fusion surgery. This article discusses and compares various fusion techniques, including Oblique Lateral Interbody Fusion (OLIF) surgery.

An OLIF is a surgical technique for spinal problems that minimizes cutting to muscles and uses a single port to access the disc space, fill it with bone material and then fuse the bones of the lumbar spine. This can be performed as a Minimally Invasive Surgery (MIS) technique. The number of established surgeons beginning to offer MIS OLIF is rapidly increasing by around 10% every year.

When is an OLIF required?

If a patient is not responding to conservative treatments and quality of life is affected, then surgery may be the next step. Those suffering back pain from Degenerative Disc Disease, disc herniations, stenosis, spondylolisthesis and scoliosis can be candidates for OLIF surgery. Spondylolisthesis is a forward slippage of one of the vertebral bones in your spine onto the one below it. Back pain is the leading cause of reduced activity levels in people under the age of 45 and is the third most common reason for surgeries in the United States.

How is a Minimally Invasive OLIF Performed? 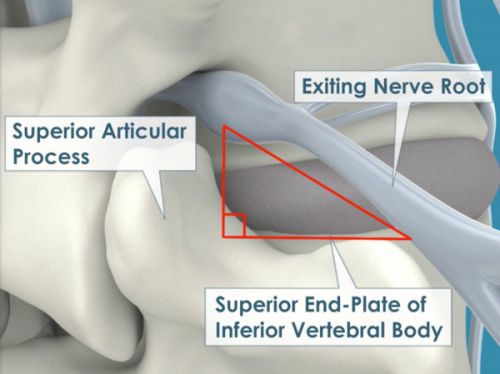 A 10-millimeter diameter surgical port is introduced to allow access of Kambin’s triangle (see diagram above for red triangle) without the need to cut through the psoas muscle. Through Kambin’s triangle, the disc is removed and then packed with either the patient’s own bone graft, or a synthetic bone growth matrix. A cage or support structure is inserted prior to fixating the disk to the disk beneath it. Bi-directional fluoroscopy or real-time X-Rays aid the procedure. Our specialist Dr. Tayard is a surgeon instructor and specialises in OLIF at all levels of the Lumbar Spine by minimally invasive approach (as opposed to open surgery).

Other types of Lumbar Fusion

The Posterior Lumbar Interbody Fusion (PLIF) technique was developed in the 1950s and became the “Golden Standard” to treat disc problems. In the procedure, the spine is approached from a 3-6 inch long incision in the middle of the back, and the lower back muscles are stripped off the lamina on both sides. The lamina bone is then removed (laminectomy) to allow the surgeon to see the nerve roots. The facet joints may then be trimmed back to give the nerves more room, before the nerve roots are moved aside and disc space is cleared out of disc material. A fusion cage containing bone graft material is then inserted into the disc space, allowing bone to grow and connect both vertebrae, completing the fusion. This is a more traditional spine fusion and may be required in some cases, however never techniques are available.

The Transforaminal Lumbar Interbody Fusion (TLIF) technique became more popular because it allowed for a one-sided approach which improved the access to other disk surfaces to do a posterior fusion. The muscles and nerves were still cut in TLIF which caused significant postoperative issues. To address these issues, a minimally-invasive TLIF was developed to decrease blood loss and lower the complication rate, even though the MIS TLIF took longer to perform than the original TLIF. Patient outcomes were similar for both MIS TLIF and traditional open TLIF, however the MIS TLIF was more technically challenging for the surgeon to perform.

The Anterior Lumbar Interbody Fusion (ALIF) approach had several key advantages but involved a major abdominal incision. This technique allowed direct view of the disc space and vertebral bodies which permitted easier clearing of the disc space. The back and lateral muscles were spared in the ALIF which reduced postoperative pain.

A consideration was that major organs and blood vessels had to be avoided or moved out of the way. There were significant reasons why some people could not undergo this approach such as prior abdominal surgery or known scar tissue. ALIF also causes retrograde ejaculation in a very small number of male patients (1-2%). However, the complication rates between ALIF and TLIF were similar, including comparable blood collections, wound infections, wound separation, spinal fluid leakage, nerve damage, and non-fusion rates.

Is a Minimally Invasive OLIF right for me?

Spine surgeons around the world have different training, experience, available technologies and even philosophy. Ultimately a patient may not be a candidate for the procedure they have researched and chosen, or a different surgery may be more suitable. If you have been advised for spine surgery, we encourage you to receive and compare multiple specialist opinions. You are welcome to enquire with us today and we will guide you through an evaluation with our independent spine specialists.